Here’s a quick rundown on the growing global water crisis

Climate change is warming the planet, making the world’s hottest geographies even more scorching. At the same time, clouds are moving away from the equator toward the poles, due to a climate-change driven phenomenon called Hadley Cell expansion. This deprives equatorial regions like sub-Saharan Africa, the Middle East and Central America of life-giving rainwater. 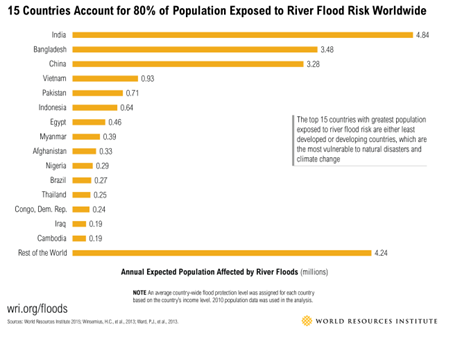 Paradoxically, climate change is also increasing precipitation in other areas, and people who live near rivers and streams have the most to lose. Currently, at least 21 million people worldwide are at risk of river flooding each year. That number could increase to 54 million by 2030. All countries with the greatest exposure to river floods are least developed or developing countries – which makes them even more vulnerable to climate change and natural disasters. This summer, extreme flooding submerged over a third of Bangladesh, claiming over 115 lives and affecting 5.7 million citizens.

It’s a simple equation: As populations increase and incomes grow, so does water demand. The world’s population, now at 7.5 billion, is projected to add 2.3 billion more people by 2050. How can the planet satisfy their thirst? Growing incomes also exacerbate the water problem, because of the water-intensive products—like meat and energy from fossil fuels—that richer populations demand.

3) Groundwater Is Being Depleted. 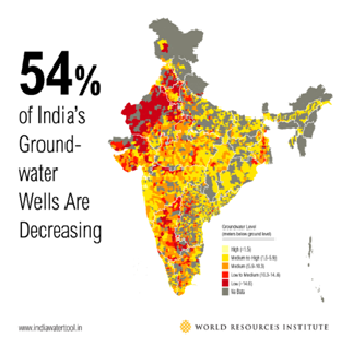 About 30 percent of Earth’s fresh water lies deep underground in aquifers. And it’s extracted daily for farming, drinking and industrial processes – often at dangerously unsustainable rates. Nowhere is this more evident than India, which guzzles more groundwater than any other country. 54 percent of India’s groundwater wells are decreasing, meaning that water is used faster than it’s replenished. Unless patterns shift, in 20 years, 60 percent of India’s aquifers will be in critical condition.

Unlike an incoming hurricane or a drained lake, the naked eye cannot see when groundwater reserves in aquifers are declining. Global water supplies are susceptible to this hidden and growing threat.

4) Water Infrastructure Is in a Dismal State of Disrepair.

Having enough water to go around is only the beginning. That water also needs to be transported, treated, and discharged. Around the world, water infrastructure―treatment plants, pipes, and sewer systems―is in a state of disrepair. In the United States, 6 billion gallons of treated water are lost per day from leaky pipes alone. Built infrastructure is notoriously expensive to install and repair, meaning that many localities ignore growing infrastructure issues until disaster strikes, as it did in California earlier this year.

5) And Natural Infrastructure Is Being Ignored.

Healthy ecosystems are ” natural infrastructure” and vital to clean, plentiful water. They filter pollutants, buffer against floods and storms, and regulate water supply. Plants and trees are essential for replenishing groundwater; without them, rainfall will slide across dry land, instead of seeping into the soil. Loss of vegetation from deforestation, overgrazing and urbanization is limiting our natural infrastructure and the benefits that it provides. Forested watersheds around the world are under threat: watersheds have lost up to 22 percent of their forests in the past 14 years.

Although it’s true that water is a renewable resource, it’s often wasted. Inefficient practices like flood irrigation and water-intensive wet cooling at thermal power plants use more water than necessary. What’s more, as we pollute our available water at an alarming rate, we also fail to treat it. About 80 percent of the world’s wastewater is discharged back into nature without further treatment or reuse. In many countries, it’s cheaper to receive clean drinking water than to treat and dispose of wastewater, which encourages water waste. This brings us to the next issue:

Globally, water is seriously undervalued. Its price does not reflect the true, total cost of service, from its transport via infrastructure to its treatment and disposal. This has led to misallocation of water, and a lack of investments in infrastructure and new water technologies that use water more efficiently. After all, why would a company or government invest in expensive water-saving technologies, when water is cheaper than the technology in question? When the price of receiving clean water is closer to its actual service cost, efficient water use will be incentivized. And on the flip side, the poor often end up paying disproportionately high prices for water, stunting development.

It’s Not Too Late

Amidst these seven deadly water sins, there is good news: governments, businesses, universities and citizens around the world are waking up to water challenges, and beginning to take action. Each year brings more solutions – like using wastewater for energy, using restoration to bring water back to dry topographies, and monitoring groundwater levels more closely. However, even the best solutions will not implement themselves. Along with fresh water, political will and public pressure are critical resources in ensuring a sustainable future for all.